We said goodbye to Vardaman's sweet potatoes and headed west, toward Jake and Rip's. For the uninitiated, that's a restaurant just off I-55 in Grenada, and it serves some of the best restaurant-fried okra ever. We love fried okra, but experience has taught us that restaurant okra is almost always disappointing. We eat it anyway, of course, because it's okra, but it saddens us. So, we were happy to find that Jake and Rip's okra, while not as good as homemade, is far better than any we've found in a restaurant. We weren't hungry, having just gorged on sweet potato everything, but it was lunch time and we don't often find ourselves at Jake and Rip's around lunch time, so we took that as “a sign.” We ordered okra and catfish (with assorted carbohydrates) and stuffed ourselves shamelessly before setting off for our next stop: Duck Hill.

Duck Hill is a town of some 700-800 people sitting on U.S. Route 51 between Grenada and Winona. Although we are not particularly knowledgeable about such things, we are told that it hosts a very good Grassroots Blues Festival every July. 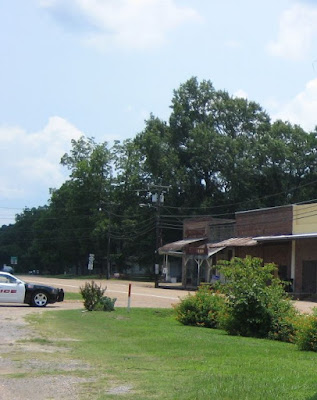 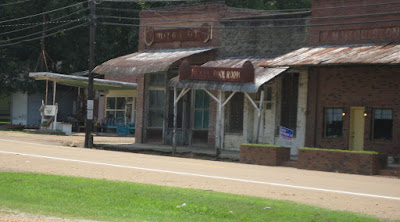 Duck Hill's name is interesting in that it has nothing to do with ducks; it's named after a Choctaw chief (and medicine man) named Duck. He held war councils on a large hill near town, so - Ta Dah! - Duck Hill.

The town is so small that it's hard to believe the “City of New Orleans” once stopped here on its run between Chicago and New Orleans. It did though. The old depot no longer stands, and there is nothing that makes us sadder than to learn that there “used to be” a depot. They lend such charm to a town.

There is, however, a Union Pacific caboose parked on a bit of track alongside the main drag. It's in a small, park-like area, and there is a statue of Chief Duck standing next to it. 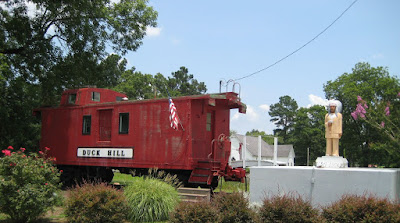 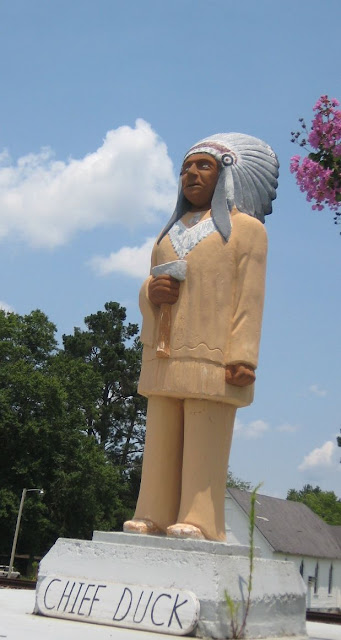 While checking out the train and statue, we spotted a museum nearby, so we zipped over. 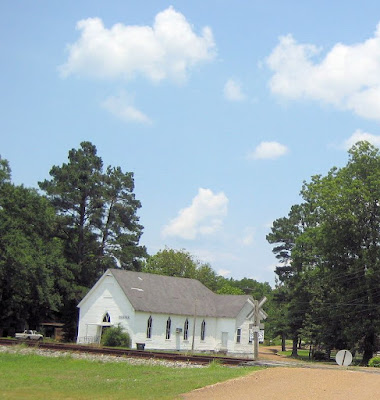 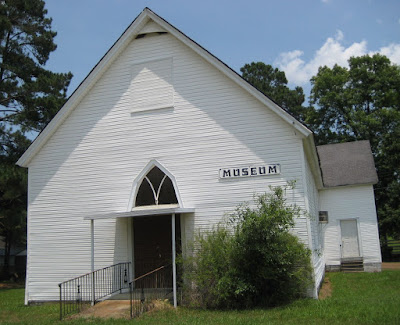 The building had obviously been a country church in another time,  but we couldn't discern what kind of museum it is now, or even if it is still open. We noted a broken window or two, so it may no longer function as a museum. Oddly, we never saw anyone to ask about such things.

Well, not so oddly, really; the town's not deserted by any means, we just didn't knock ourselves out. There is a beautiful new bank on the main street through town, and there were cars parked around the hardware store, too. We feel sure anyone at either place would have been happy to help us. Unfortunately, however, the sweet potatoes, sweet tea, okra, cornmeal-coated catfish, hush puppies, french fries, etc. had lulled us into carb comas by then and we were having a really hard time staying awake and focused. That's sad as it would have been nice to chat up a few locals and learn more about Duck Hill.

We did manage a stop at their lovely Civil War Memorial, but after that, the best we could do was turn the car's AC way down to keep us awake and continue on to Winona. 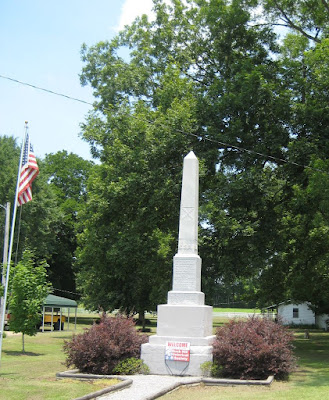 We were most impressed with Winona, by the way. It reminded us of Aberdeen, Water Valley, or one of the many fine old towns that exude the elegance of an earlier era. The town has lovely old buildings and some gorgeous old homes, and they have made a concerted effort to save some of their old murals. We love that. 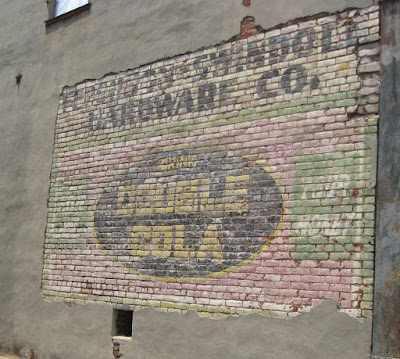 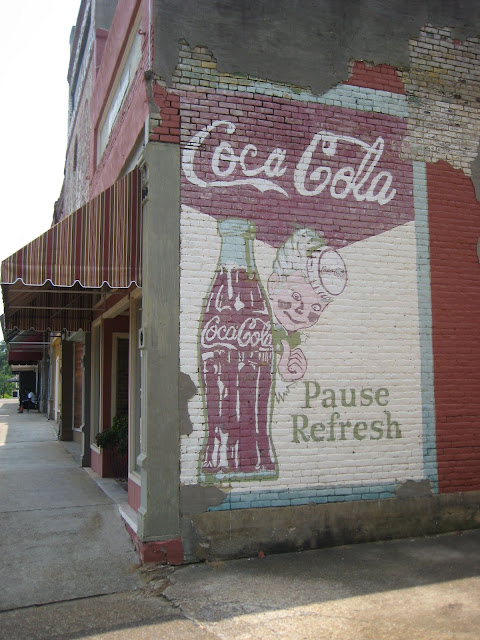 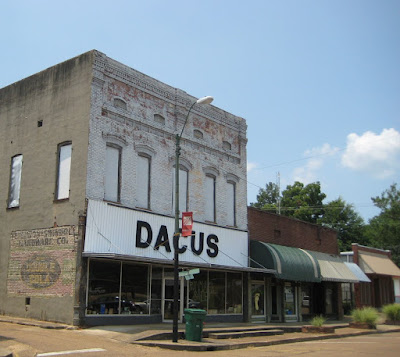 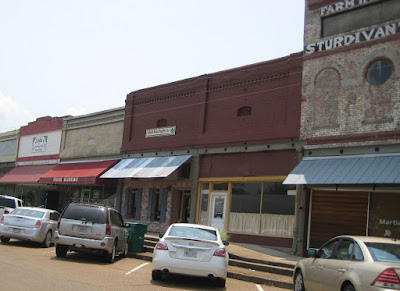 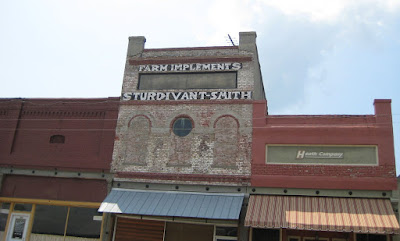 But here's what we loved most about this pretty little town: they have their train depot. Thank you, Winona.

Actually, it would be shameful if they didn't have their depot, given that Winona was one of Mississippi's many "railroad towns." And, Winona not only kept its depot, it has apparently made good use of it by leasing it to businesses. The whole scene is enhanced by the train cars permanently parked there! 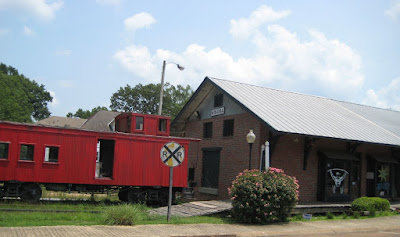 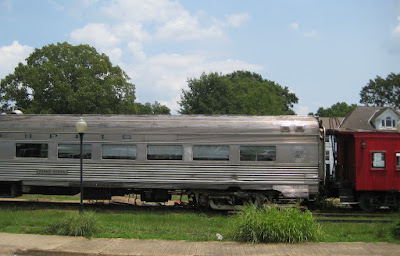 We drove around town admiring things for a little while, but this was a visit with a specific purpose - we wanted to see The Wisteria Hotel. We had seen a picture of this beautiful place in its heyday and there are so few old wooden hotels still standing that we didn't want to miss a chance to see one. Unfortunately, we couldn't find it. We didn't have an address and it's not listed under "Places of Interest" on the GPS, so we had to ask for directions. A very nice lady  gave us explicit directions, although she seemed a bit puzzled as to why we wanted to see it. Apparently, it is in a state of decline. We don't know what extent of decline because, even with directions, we couldn't find it. We were still too comatose to process sequential  information...and probably unfit to be operating heavy machinery (like a car).

We had only planned to stop over briefly in Winona anyway, as the town is part of another planned Tiny Travel trip - one we intend to undertake fully lucid. But when we realized we  couldn't follow directions well enough to find a large building in a town of 5,000 people, we knew it was time to go on to Greenwood and lie down for a little while.

Add comment
Load more...
Newer Post Older Post Home
Subscribe to: Post Comments (Atom)
Always, without fail, regardless of the number of times I enter Mississippi, it creates within me feelings that are felt at no other time...Joy...Hope...Love. I have always felt that Mississippi belonged to me and one must love what is his.
James H. Meredith