We left Greenwood early, knowing there would be a lot of interesting things to see along the way, so it was just midmorning when we finished our “The Help” tour here at the Tallahatchie  Bridge. The bridge is on Money road, near Tallahatchie Flats and the house where Skeeter's outside home scenes from "The Help" were filmed.

Until we got close enough to read the whole plaque, we really thought they might be touting this bridge as being “the one” where the imaginary Billy Joe threw an imaginary something into the water in 1967's “Ode to Billy Joe.” (Remember, we were on "The Help" tour, so our sense of reality/Hollywood was a bit blurred.) But in fact, no one is trying to make something out of nothing; it's a Mississippi Country Music Trail marker acknowledging the success of former Greenwood resident Bobbie Gentry. 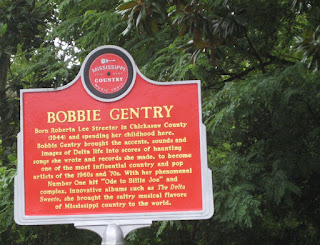 And we want to make it perfectly clear that we threw nothing - nothing at all - off the Tallahatchie Bridge. Although it was tempting. 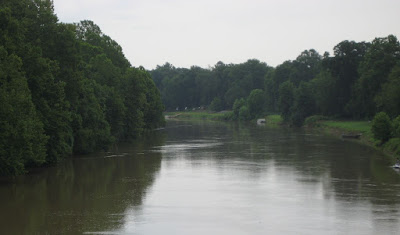 This ballad struck a cord with millions of people and still gets a surprising amount of air time. It was a huge crossover hit and appealed to people of all ages, many of whom – despite a mountain of evidence to the contrary – seemed to believe the story was true. People spent hours debating what Bobbie and Billy Joe had been doing on Choctaw Ridge, why they threw something off the bridge, what they threw, why he jumped....Unencumbered by the fact that Bobbie Gentry repeatedly said she made up the story, folks soldiered on with their speculations. We remember adults in Tupelo, people who ordinarily had neither the time nor the inclination to engage in gossip, discussing at length the identity of the couple who “bought a store in Tupelo.” Seriously. Any male store owner with a wife named Becky (or a wife not named Becky) was fair game to be the unnamed "brother." For some time the gossip revolved around a shoe store owned by a couple who had lived in town for years and were well known locally. Their long history in town and the fact that anyone could just walk in the store and ask them – to say nothing of the fact that they probably didn't even know Bobbie Gentry – warranted no consideration. The fun was in the speculation. And it was fun for a lot of people, because it's exciting to be part of something the whole country is talking about. And the whole country really was talking about that song.

DOCKERY PLANTATION
Moseying on toward Cleveland, we came upon Dockery Plantation. Although it hadn't been on our agenda for this particular trip, we had time to look around and take a few pictures. Dockery was a huge player in its day, a 10,000 acre cotton plantation that once employed 2,000 people. Because it functioned until 1982, there is still a lot to see, and because influential blues man Charley Patton once made his home there, a lot of people want to see those things. 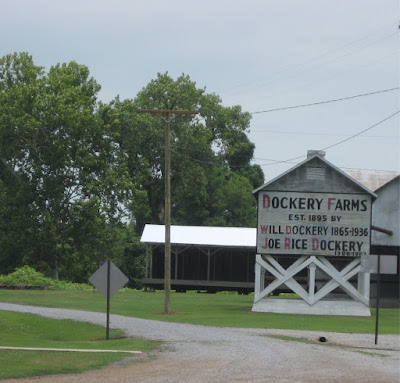 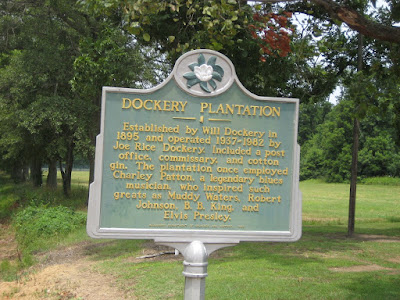 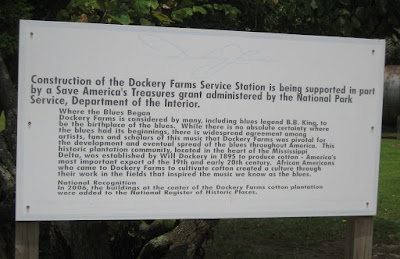 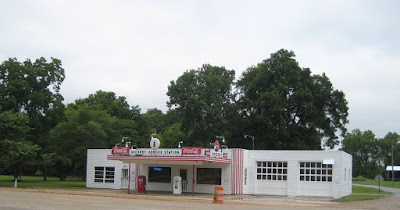 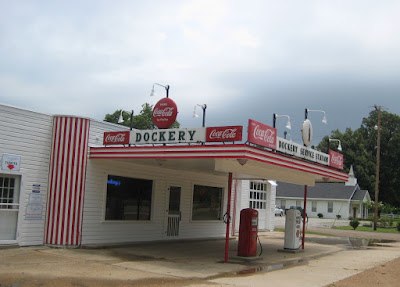 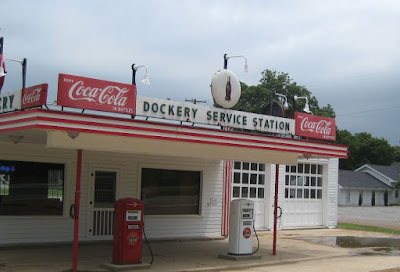 Like most large plantations, Dockery was self contained – it had its own cotton gin, school, post office, store, churches, money, and even a running railroad track to connect the plantation to the main railroad line in nearby Rosedale! Private tours can be arranged, but we were happy just to stroll around and admire the place.

The next two pictures are for our readers who have never visited the Delta but have always heard how flat it is. It is. 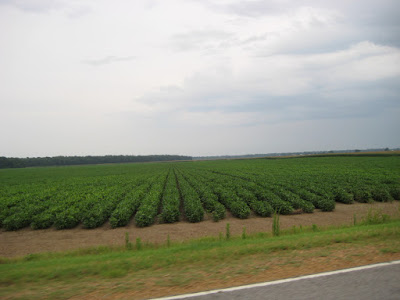 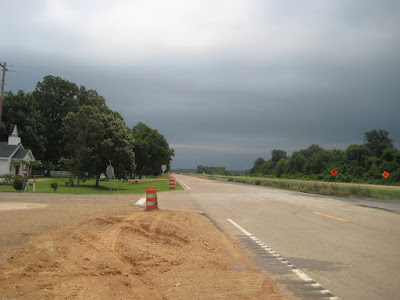 CLEVELAND
We had been to Cleveland years ago, and we loved it. So, we wanted to go back and take a longer look at Delta State and possibly pick up a couple “Fighting Okra” tee shirts for some of our favorite little people. Delta State took us by surprise last time, and we wanted to spend more time there. We drove around campus, toured their student center, and once again, were stunned by just how large this university is, to say nothing of how lovely it is.
It's also lively! Even in late June the campus was a hopping, vibrant place.  (See Delta State website)

Near DSU, we passed the construction site for the huge (27,000 SF) building that will be The GRAMMY Museum Mississippi. Most Mississippians are aware that our state has produced some of the world's finest musicians/singers/songwriters of every ilk. It almost defies belief that such a small state could house such a wealth and variety of talent, and it's heartening to see  the world acknowledge Mississippi's bounty. Apparently, the site is actually on the university's campus, which we hadn't realized was that huge. It is though, and the school is (not coincidentally) home to the Delta Music Institute. 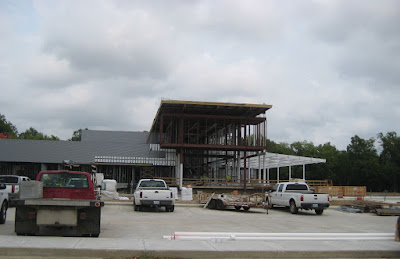 While hosting such a museum is quite a coup for Cleveland, we think the town is pretty incredible anyway. Their pretty train station, cool clock, and charming, beautifully landscaped downtown (with plenty of parking!) make it a pleasure to visit.. 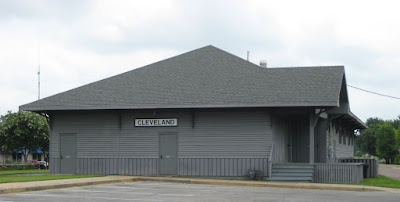 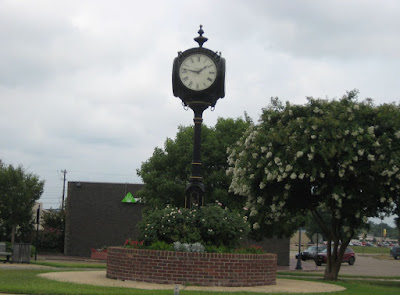 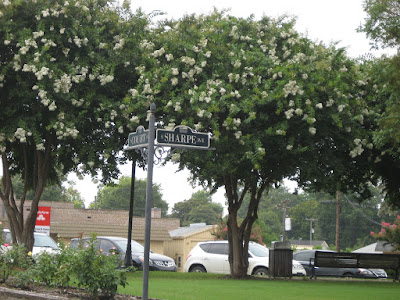 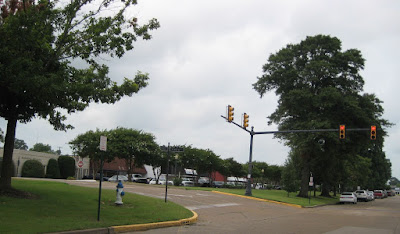 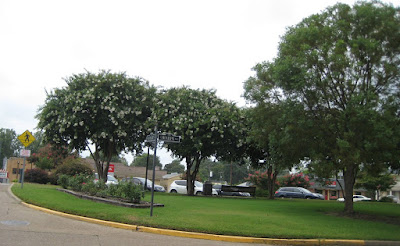 Also, they are kind to ducks. 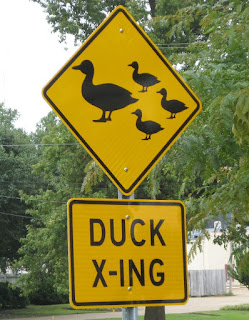 And, they have some of the finest small town shopping we have ever stumbled across – thanks (we assume at least in part) to it being a university town. We had fond memories of our last shopping excursion there, and sure enough, we had an equally good experience this time. 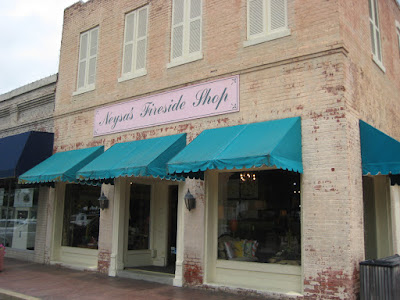 We started our visit at Neysa's Fireside Shop – a beautiful store bursting with desirable things for the home; we could have stayed for hours. It's run by really nice people too, which always helps. We admired everything, and Marian picked up some great Mississippi pillows. Then we moved two doors down to another place we remembered fondly from our last visit: The Monogram Store. This place has everything you might want to monogram, plus a lot of things you didn't even realize could be monogrammed. It's just a wonderful store.

From there it was only a few steps to The Sweetery. You have to love a place with a name like that. We stopped in for a visit and a really delicious cookie and we're so glad we did; it's a fun place to spend a little time. They have all sorts of goodies, but we had learned our lesson the day before. We walked off our cookies by checking out the rest of downtown (and trying on a few things in a fashionable clothing store), and then it was time to move on. There was just no way to see all the things we wanted to see in Cleveland as a sidetrip, so we plan to return and spend a day there once the GRAMMY Museum opens. There are several restaurants we want to try and a few landmark buildings we'd like to check out, plus we really want to see DSU during the regular school year, when everything is going full on. But for today, Oxford called us and we had to go.

We can't help it. We left our youth there and it's such fun to revisit it. Every time we go, we spend a few minutes looking for changes on campus and taking delight in anything that is just as we remembered. Then we check out Oxford's seemingly infinite number of new streets, intersections, houses, and buildings and complain about how different (that would be, better) Oxford was when it was just a simple country town. And then - not being ones to dwell on the negative - we proceed to eat and shop in all the wonderful places that didn't exist in our day.
Posted by Susan 7 comments:

Email ThisBlogThis!Share to TwitterShare to FacebookShare to Pinterest
Labels: Cleveland, Delta State, Delta State University, Dockery Farms, Fighting Okra, Grammy Museum, Neysa's Fireside Shop, The Monogram Store, The Sweetery
Newer Posts Older Posts Home
Subscribe to: Posts (Atom)
Always, without fail, regardless of the number of times I enter Mississippi, it creates within me feelings that are felt at no other time...Joy...Hope...Love. I have always felt that Mississippi belonged to me and one must love what is his.
James H. Meredith