Broken bones, family holidays, books that need editing – all these things conspired to shut down Tiny Travels for six long months. But we’re back now, packed and ready to go. We were so excited at the chance to get on the road again that we left extra early, intent on cramming in all the places that are too small to warrant a trip in their own right. The intended highlight of the trip was my father's hometown of Houlka, one of the two places my parents actually took me when I was growing up ( was the other). When I was a child, we often broke up the trip to my grandparents’ farm by stopping to enjoy a picnic lunch at the roadside park that marked the half-way point of our journey. Imagine my surprise when I grew up and learned that Houlka is only thirty miles from ! Seriously. We stopped for lunch on a thirty mile trip. Of course, when your parents drive twenty-five or thirty miles an hour, the trip is a bit longer, but still….thirty miles!

Marian and I made our first stop in Pontotoc, at The Hardware Store, Inc. Yes, it’s a real hardware store, but it’s got a pretty impressive gift shop with cute stuff and we enjoyed looking around. We contributed a little something to the local economy before heading on toward Houlka, and just outside Pontotoc I spotted the roadside park we used to stop at in the 50s. It’s closed now, but it’s still there – I couldn’t believe it.


Shortly after we passed the park, we turned off the highway to make a side trip to Algoma. Wise move. It’s just a little settlement out in the middle of nowhere, but Algoma is a surprisingly upscale community. For the most part, the houses are large, modern and lovely, the yards huge and well kept. Only about fifteen percent of the population earns below the poverty line, so compared with some of the places we've seen, Algoma’s a virtual or Central Park South. We didn’t see much in the way of businesses in town, except for their locally-famous seafood restaurant (Seafood Junction). The only other business we saw was a quail farm and it was beautiful.
Algoma has the cutest city hall ever, as you can plainly see. You can also see that the town was incorporated in 1904 and again for good measure in 1988. The “God Abides” is more than just a thought, it is what Algoma means in…Hebrew, maybe? And, judging by the number of churches in town, it may be true. God may actually abide in Algoma. Behind the town hall is a walking track, a really nice addition to their little community, and even more impressive considering that there are only about 500 people who call Algoma home. The town may not have a large population, but it’s an obvious case of quality over quantity. These are people who take pride in their houses, yards, and churches and keep them tidy. Sadly, that’s less common than one might think in backroads .


A map of shows both Houlka and New Houlka, and I was anxious to see New Houlka. A few years ago, I drove to the Houlka I remembered from my childhood and was horrified to see that the downtown had been virtually abandoned; I assumed everything had been moved to New Houlka. Sadly, it turns out that that nearly deserted town is New Houlka! We happened upon Houlka’s mayor, who told us that the town had been located down the road originally, but when the railroad came through, they moved to accommodate it. So, it seems that New Houlka is the only Houlka, and old Houlka is really nothing more than a highway intersection. One has to wonder why it’s still on the map.


Marian -- In my opinion, since New Houlka is now old and Old Houlka doesn't exist, shouldn't it just be Houlka?


Houlka was never a big town, but it was an active, viable farming community when I was little, and it’s sad to see it in such decline. It’s especially sad for me because I’m related to half the town. We don’t know each other, but we’re family. Houlka does have one highpoint though: the old building. It’s been refurbished and it’s a treasure.


Marian -- I don't know why I didn't take a picture of this beautiful old building. It is a traditional two-story, multi-windowed schoolhouse that has been rebricked and lovingly refurbished. It is the type of building that makes you stop and take notice. It is south of Highway 32, about a city block from the highway. The activity inside the building denotes some sort of civic organization or something, but they encourage visitors to look around and see what work they have done. The heart pine floors, the bead-board pine walls, the seemingly original stairs.....the building is decorated with pictures of the senior classes from the good ole days and of Jim Hood -- Mississippi's current Attorney General -- who was born in New Houlka. (How he did manage that? There's no hospital in Houlka.) 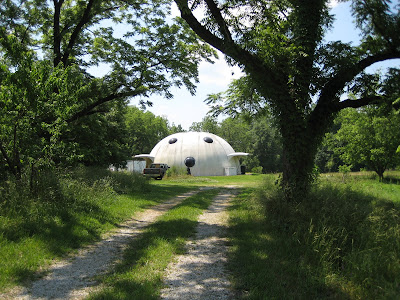 From Houlka we moved on to via Van Vleet, which – like so many of ’s communities – is invisible. We tried; we turned off the highway and followed the sign, but there was no town as far as we could see. However, we're glad we went because we got to see this little round house! Actually, it wasn't that little, but there is no denying it's a site worth photographing.


Marian -- This house makes me smile...the little eyes, little round mouth, and perched wings....ready to take flight... If not for the chest freezer just outside the door on the right, I would swear we were looking at an UFO. Reckon what it looks like at night? Hmmm? Wonder if they could paint it orange in the fall?

I was a little disappointed to see that there was no “Welcome to Houston, birthplace of Susan Lentz” sign to greet me at Houston’s city limits, but still…the little town has some bright spots. We visited an antique store and had a delicious lunch at My Friends Place, a restaurant/gift shop in an old house. (And yes, it concerns me that Friends is not possessive, but according to their business card, that’s the way it’s spelled. I can’t do anything about it. Heaven knows, I would if I could.) Then we headed to Vardaman for dessert at Sweet Potato Sweets.


Vardaman, as you may or may not know, is the “Sweet Potato Capital of the World.” Really, it is, at least according to local folks, although might argue the point. At any rate, those little orange potatoes are a lifesaver as far as economies go. There is a small store in Vardaman called Sweet Potato Sweets and, economically speaking, it’s kind of icing on the (sweet potato) cake, a way for a few more people to make a living off the local crop. Brilliant idea too! Everything they sell is made from sweet potatoes and these people are creative! There are sweet potato pies, breads, cakes, cookies, muffin tops, truffles, butters, and jams. There are also sweet potato/pecan pies, pecan sandies made with sweet potatoes, fudge made with sweet potatoes, sweet potato tortilla chips, even sweet potato coffee. The store sells sweet potatoes, too, but I highly recommend sampling the potatoes they've already tampered with - everything we tried was delicious. Take a look: http://www.sweetpotatosweets.com/.


There was a nice town square, but it made us sad that there were a goodly number of vacant stores. We noted a lot of nice houses around town though, and it was obvious that had probably been a lovely little town.


The only store we visited was ’s Drugs. Their gift shop had some cute stuff, so we shopped around a bit before heading back to the pharmacy to pay for our finds. There we met the store’s owner (?), who is also the mayor of . (Apparently, it was meet-a-mayor-day in .) So, we had a lovely chat with the friendly mayor.

Bruce was the next stop, but we didn’t stop for long. We’d been there before (it’s actually the trip that started our Tiny Travels) and not much has changed. We revisited Jeffrey's, the gift shop/lunch counter, and the antique store we liked so much last time, and were sad to see the store now stocks mostly "catalog stuff." 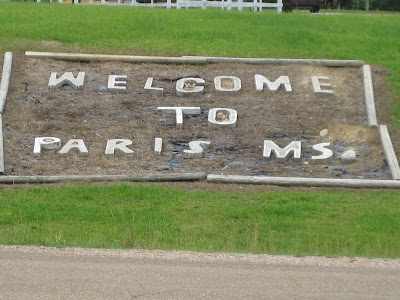 Yes, Paris. Marian has always wanted to see Paris in the springtime, and hey, it's springtime, so we went to Paris. We could tell we were there because of the almost-perfect sign pictured here. Other than that, it was kind of hard to spot the place. Parisians could make a fortune if they built a replica of the Eiffel Tower and sold tee shirts, but they haven't opted to do either of those things, so we set off for . 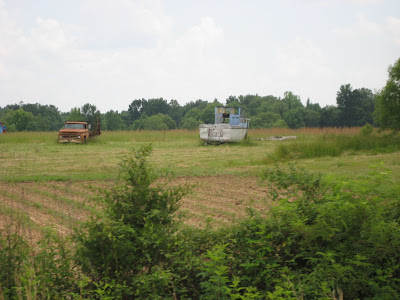 It was fortuitous that we made the little side trip to Paris; otherwise we never would have seen the shrimp boat sitting in the middle of a pasture. It was turned away from us, and appeared to be headed toward the horizon, or would have been if it had been moving. Which it wasn't. It's doubtful that it will ever move again, but it would be interesting to learn what a shrimp boat was doing in North Mississippi. Actually, it bore an uncanny resemblance to The African Queen.

Wow! Water Valley won the prize – or would have, had we had a prize. There’s still work to do downtown, but a lot of refurbishment has already been done and someone smart appears to be in charge. And the houses! I can’t recall running across so many gorgeous old homes in one town, virtually all of which appear to have been restored or are in the process of being restored. The neighborhoods around the downtown area are hilly and tree covered, so these gorgeous old houses are beautifully set to boot. What a jewel of a little town.

Our trip home took us through , so we felt obligated to make a stop at our favorite antique store before heading back to . This brings up the subject of ’s rapidly declining number of antique stores. In every part of the state we have traveled through, we have seen an incredible number of antique stores – almost all of them closed. Seriously, it’s like an antique store blight of some sort has wiped out almost all small-town shops. We were told by one store owner that they just can’t make any money, that young people aren’t interested in buying antiques – they don’t like such things, they want modern, cheap, contemporary-looking Chinese goods. (This actually explained a lot – Marian and I had been wondering why so many “antique” shops had seven or eight old things and the rest of their inventory was Chinese-made junk.) Just as our generation wanted no part of our grandparents’ tatted dresser scarves or porcelain statues of 19th century ladies carrying parasols, our children turn up their noses at antique silver ice cream spoons and crystal salt shakers. And, more puzzling, they think we are the ones without taste!!! They’re wrong, of course, but it seems that they have propagated to the point that they now rule, so there's little we can do. It’s a sad day when Baby Boomers no longer have the clout to dictate our will and good taste to the rest of the population.
Posted by Susan 3 comments:

Always, without fail, regardless of the number of times I enter Mississippi, it creates within me feelings that are felt at no other time...Joy...Hope...Love. I have always felt that Mississippi belonged to me and one must love what is his.
James H. Meredith